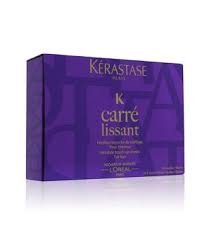 review by novsunflower over 3 years ago
Beauty
Kerastase Paris Carre Lissant
share
save
$33.99
Buy from Amazon

Flyaways. I despise when I take the time to dry my hair with a blow dryer, and I look in the mirror and all I see are the flyaways. You know what I'm talking about. It's those little hairs that just have a mind of their own. It's a little army of hair with minds of their own, trying to march off my head.

THE FRIZZ annoys me. It means I'll be photoshopping it out of any, and all photos I take on a frizzy hair day. Damn the flyaways. My daughter has the same issue. We've got fairly straight hair. It doesn't matter how much styling product I use in my daughter's hair, it always ends up with the flyaways.

School pictures one year ago, I chose a beautiful blue background for my daughter's photos. It made her blue eyes really pop in the photo. It also showed EVERY LAST FLYAWAY in all their glory. I was upset to see the photographers didn't notice, nor did they fix it. I mean, seriously. There's no way they didn't see the frizz. She looked like bozo the clown.

I picked up the phone, called the photographers, and once they pulled up her digital photo on their end, they apologized and promised to fix it. After the photo last year, I spent months trying to find something to help fix the frizz.

All I could find was argan oil, which worked okay, but it just made our hair look oily faster. I know, such issues. Woe is me. However, it's annoying. I wanted a solution that worked for both of us.

About a month ago, I finally bit the bullet and had bangs cut into my hair. While I was there, the stylist pulled out what looked like a dryer sheet from a box. She ran it along my hair after she'd cut, and styled it. I grabbed her hand with the sheet in it, and asked her "what the heck is that? A dryer sheet?" She shook her head "No. But it's similar. And look, get up close to the mirror. You won't see one flyaway." She got me a hand mirror so I could see SUPER CLOSE.

My girl was right!

She reached into her drawer, and presented to me in what seemed like a halo of light, the purple box. Hairstyle touch up sheets. L'Oreal rocked the poop out of this product, and I didn't even ask how much they cost, I told her to get me a box and add it to my bill.

Yes, that's how mind-blowing-ly awesome these touch up sheets are. She went on and about being able to use one sheet multiple times, so the price wasn't as bad as you'd think. I stopped her mid-sentence and said "I'm buying it, I don't care what it costs. Just add it to my bill."

It's true. You can use one sheet almost 5 times, as long as you store it properly back in the box. It also has a nice scent. The best part is that it works, obviously. The second best part? It works without making my hair, or my daughter's hair, oily and heavy.

I'm addicted. Very happy we found these now that my daughter has started acting and modeling. Her look is so much more polished, and professional, without tons of flyaways and frizz. BA-BAM. Mom's got mad skills in her eyes, and magical powers in her eyes!

Oh my little purple box, I bow down to you and your magical touch up sheets.